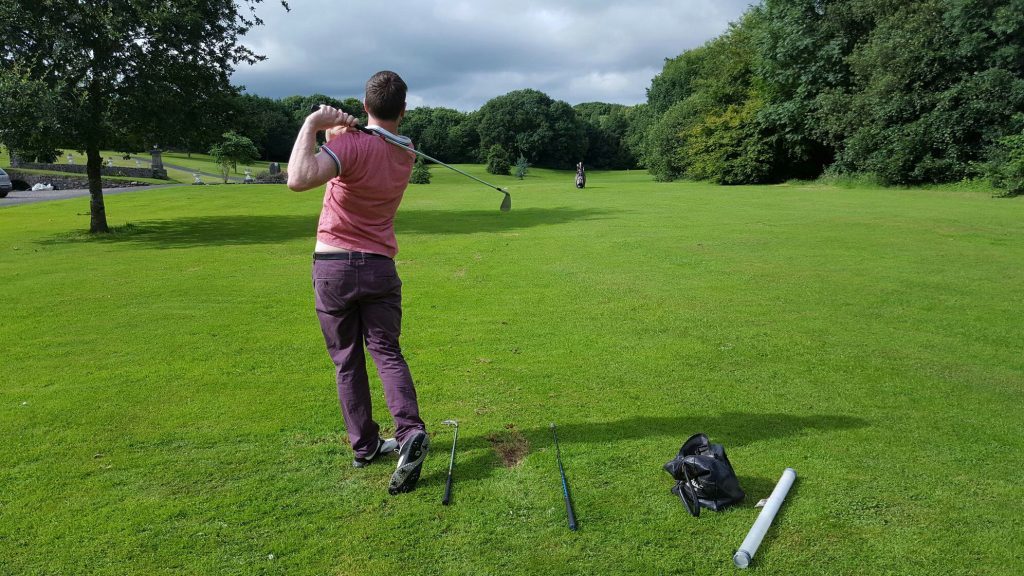 The following piece was posted on boards.ie by a golf lesson customer and I am really delighted with his results.

As I have posted before, I have been hooking the ball for the best part of 4 years now. Initially, it wasn’t too bad but it just got worse and worse. I gave up golf last year only playing 3 or 4 times. I went back to it with gusto this year and am playing nearly every week. Same problem though, even worse. I have looked online, read up and went for a lesson with a well-known pro. No joy! I was about to pack it in but went to the range for one last time.

I had a bucket of 60 balls. After hitting 25 hooks in a row I asked the guy next to me would he mind taking a video of me with my phone. We got chatting and he recommended a pro in Glanmire called John Dooley. I thanked him and continued to hit the rest of the balls. In all 2 out of 60 were good, the rest were hooking with the exception of the driver where one in 3 were snap hooks!!

I said, what the heck, I’ll give this guy a go and if he can’t fix it then I’m giving it up. I made my appointment for the Monday evening and turned up as planned. John runs the lessons from Riverstown House in Glanmire, a big, beautiful old house. Out front, he has built a fairway with 3 greens.

So, we meet and he explains the plan. He sets up his camera and asks me to hit a few balls. After the 2nd shot, he had it diagnosed. He brought me around to the camera and we watched my swing. To my untrained eye, I thought it was good enough actually. I do have a nice, smooth swing and it looked OK. John pointed out I was standing to upright and I was taking the club back inside. I kinda knew this but it wasn’t until he had me hitting a few with me squatting (as I thought it was) that I realised.

I felt sorry for John as he tried so many things to try to get me to take it back straight, but every time I took it back on the inside. We did lots of turning exercises and eventually he had me hitting irons with the ball on a high tee and then I started hitting them well. They were really good and not like anything I’ve hit before. I was deflated though as the ball was up on a 2-inch tee.

He gave me great exercises to do and I’ve done them every day. I went to the range 3 nights afterwards not expecting much. I got 60 balls again. 40 of them were better than I have ever hit the ball. 5 were heavy (but ok & straight) and 5 were hooks.

I decided to play yesterday evening ever though I probably should have held off until after at least my next lesson. It was a lovely warm evening and my Dad was going to so I said what the heck. I played 14 holes I’ve never hit it so well! There’s a par 3 where we play that’s usually a decent 7 iron to the front for me. I hit an 8 iron and saw it land on the green. Both myself and my Dad couldn’t find it (I even checked the hole but no joy). I was about to just carry on but took a walk around the back of the green…there she was after rolling off. I had 4 pars in a row at one stage.

To say that I’m ecstatic would be an understatement. I have another 3 lessons booked in as I want to really embed this “new” swing.

John’s details are below and I would be very comfortable recommending him.

This website uses cookies to improve your experience while you navigate through the website. Out of these cookies, the cookies that are categorized as necessary are stored on your browser as they are essential for the working of basic functionalities of the website. We also use third-party cookies that help us analyze and understand how you use this website. These cookies will be stored in your browser only with your consent. You also have the option to opt-out of these cookies. But opting out of some of these cookies may have an effect on your browsing experience.
Necessary Always Enabled
Necessary cookies are absolutely essential for the website to function properly. This category only includes cookies that ensures basic functionalities and security features of the website. These cookies do not store any personal information.
Non-necessary
Any cookies that may not be particularly necessary for the website to function and is used specifically to collect user personal data via analytics, ads, other embedded contents are termed as non-necessary cookies. It is mandatory to procure user consent prior to running these cookies on your website.
SAVE & ACCEPT